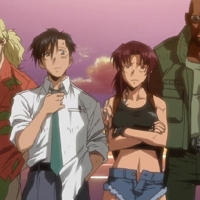 Within Thailand lies the city of Roanapur, a safe haven for all types of criminals and where corruption thrives to its very roots. Ran by big crime syndicates like the Yakuza or the Russian and Italian mafias, Roanapur is the center for illegal and criminal activities, and is the base of operations for the notorious group called Black Lagoon.

The story follows Rokurou Okajima, a Japanese businessman who lives a routine and monotonous life, who was assigned for a delivery trip to Southeast Asia. Tired of his dull life and searching for new adventures, Rokurou eagerly embarks on his task which was different from his usual job. The simple delivery quickly turns for the worse, as Rokurou gets abducted by Black Lagoon. The group intended to hold Rokurou as a bargaining chip, but negotiations failed as their hostage was betrayed and abandoned by his employer. With nowhere else to go, Rokurou decides to join Black Lagoon, and his appetite for change will be filled quicker than he would have wanted to.

Black Lagoon is an anime adaptation of the action comedy manga series under the same name, written and illustrated by Rei Hiroe. Produced by studio Madhouse, the anime series aired a total of 24 episodes (divided into 2 season) between April 08, 2006 and December 18, 2006. It has 5 OVAs, which were aired between July 17, 2010 and June 22, 2011.

Rokurou “Rock” Okajima
Rokurou is born from a decently wealthy but neglectful family in Tokyo. After he was held back a year before getting admitted into college, his family’s expectations of him lowered, especially that his brother landed a job in the Japanese government. Eventually, he got hired into Asahi industries, where he worked as an insignificant white collar salaryman. He quickly found his existence become bland and meaningless.

During a delivery job to the Southeast Asia, their ship was hijacked by the pirate group called Lagoon company, who wante