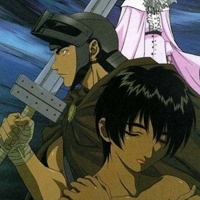 Gatts, an incredibly powerful warrior, is a lone swordsman in a medieval-type fantasy world. He loses in a battle with a mysterious swordsman named Griffith, who holds a pendant called the Eye of God. Secrets are revealed as the story progresses along the depths of fantasy combat and political intrigue.

The dark world of medieval Europe is the backdrop of this lone mercenary’s adventure.