Phantom ~ Requiem for the Phantom [TV] 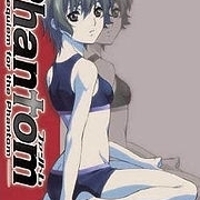 Phantom of Inferno (Phantom ~ Requiem for the Phantom) is a story detailing the life of a 15-year-old Japanese boy who is kidnapped after witnessing the killing of a reporter. After being kidnapped his memories of his past life are erased and is given the choice to join Inferno or die. He makes the only choice he can to join and is given the name Zwei(German for number two) and will study under Ein. Ein is also known as Phantom since this is the title given to the organization’s top assassin.

Inferno is said to be the United Nations that exists only for crime syndicates. As Zwei makes his way through training and various missions, deceit and betrayal occur even within Inferno that slowly puts Zwei in increasing danger. Along the way, he meets a girl by the name of Cal Devens and though he tries to protect her, she too is drawn into Inferno to become the assassin, Drei(German for number three).
The OVA/anime series follows Zwei as he makes a trip to America, only to witness an assassination that leads to his memory loss and indoctrination into Inferno. Though not as heavily as in the game, we see Zwei’s training before he goes with Ein to help with an assassination. While a different path is taken, deceit and betrayal rip apart Inferno and place Ein and Zwei on opposite sides, which eventually leads to a climatic battle between them at the end of the anime.