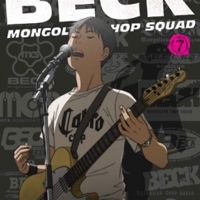 Tanaka Yukio, better known by his nickname Koyuki is a 14-year-old who feels disconnected from life itself. Through the act of saving a mismatched dog, he meets guitarist Minami Ryuusuke and becomes involved in Ryuusuke’s new band BECK. Koyuki’s life starts to change as the band struggles towards fame.

BECK: Mongolian Chop Squad is an anime series adapted from the manga of the same title by Harold Sakuishi. This series was composed of 26 episodes. BECK was first aired on TV Tokyo in Japan on October 7, 2004, with the episode “The view at 14”, and concluded with “America” on March 31, 2005. It’s first premiered in English on March 9, 2007, on Much Music in Canada. The first DVD was released in July 2007.

Episode 1: The View at 14
Koyuki Tanaka is at a dead end. At the age of fourteen, he’s already lost his passion for life. But Koyuki’s chance encounter with a young musician named Ryusuke is about to open up a whole new road in front of him.

Episode 2: Live House
When Koyuki accepts Ryusuke’s invitation to see his band perform live, he unwittingly sets down a path of self-discovery. But what Koyuki finds both disturbs and intrigues him, as the youngster uncovers the best and worst aspects of human nature.

Episode 3: Moon on the Water
Koyuki hangs out with Ryusuke and finds out more about music, and meets his sister, Maho, who later takes Koyuki to see Beck, her brother’s dog.

Episode 4: Strum the Guitar
While Koyuki takes his first tentative steps toward learning guitar, Maho suggests that he’d be the perfect lead vocalist for Ryusuke’s new band. But an accident threatens to shatter Ryusuke and Koyuki’s friendship forever, as well as putting an end to Koyuki’s musical aspirations-until help comes from a very unexpected source.

Episode 5: Beck
Koyuki’s guitar training is coming along slowly but surely until you decide to speed things up by entering him to play in the annual festival. Meanwhile, R