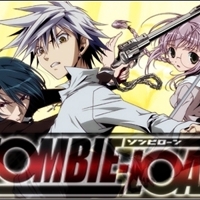 By judging the darkness of a ring around a person’s neck which only she can see, Michiru Kita knows how close a person is to their death. She notices that two of her classmates: Chika Akatsuki and Shito Tachibana, that both already have gravely dark rings around their necks. In an attempt to warn her classmates of the impending doom, she discovers their secrets instead – they are already dead.

They are kept alive by a contract with Zombie-Loan. In exchange for keeping their lives, Chika and Shito must hunt down zombies, and desire to use Michiru’s ability to assist them in their task.

Zombie-Loan is an anime adaptation of the action, romance, supernatural manga under the same name, written by Pitch-Pit and published by Square Enix. Produced by studio Xebec M2, the anime series aired a total of 13 episodes between July 3, 2007 and September 11, 2007.

Michiru Kita
Michiru Kita is a young girl endowed with the Shinigami’s Eyes, which enables her to identify people who are close to death, by judging the ring’s color around their necks. After witnessing her parent’s rings turn pitch black, which was shortly followed by their deaths, Michiru hated her ability, and tried to suppress it with the help of special eyeglasses. Since then, she lost all her motivation and will to live.

Chika Akatsuki
An energetic and lively guy, Chika Akatsuki is a zombie kept alive by a contract with Zombie-Loan. He met an accident together with Shito 6 months prior, and was brought back to life, thus he and Shito are both zombies. Chika has a spiritual chain connected to Shito, which allows them to switch their right hands at will. His right hand is capable of generating a katana that possesses Shinigami abilities. With it, he can guide the zombies they defeat to Heaven.

Shito Tachibana
Shito is good-looking but cold, a demeanor that makes him quite popular with the girls. His spiritual chain allows him to switch right hands with Chi