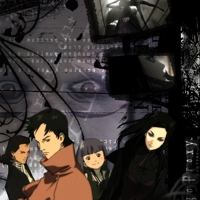 Thousands of years ago, an ecological catastrophe destroyed almost all life forms on Earth. One of the surviving cities – perhaps the only one – is the domed city of Romdo. In an attempt to hasten mankind’s recovery from this tragic state, AutoRievs, robots that resemble a human, have been created to assist the people with their day-to-day activities. However, AutoRievs began to mysteriously gain self-awareness, which was later discovered to be caused by a disease called “Cogito Virus”.

Re-l, granddaughter of Romdo’s ruler, must now investigate this phenomenon with her AutoRiev partner Iggy per orders of her grandfather. But what begins as a routine investigation quickly spirals into a conspiracy as Re-l is confronted by humanity’s darkest sins.

Ergo Proxy is a suspense sci-fi anime television series written by Dai Satou. Produced by studio Manglobe under the direction of Shukou Murase, Ergo Proxy aired a total of 23 episodes between February 25, 2006 and August 12, 2006.

Episode 1: Pulse of Awakening/Awakening
After a series of AutoRievs getting infected by the Cogito virus, Re-l was sent to investigate. Later, she gets attacked by two monsters at her home.

Episode 2: Confession of a Fellow Citizen/Confession
Re-l struggles to convince her colleagues about the encounters she had with the Proxy, and is removed from the investigation. She then finds out that her partner Iggy had gotten his recent memories erased.

Episode 3: Leap into the Void/Maze City
After his encounter with the Proxy and the authorities, Vincent concludes that he is no longer safe within Romdo and decides to leave. During his escape, he encounters an infected AutoRiev called Pino, who shows him the way to the outside world.

Episode 4: Signs of Future, Hades of Future/Futu-Risk
Outside Romdo, Vincent and Pino are taken in by a small commune. These people make a living from the dumped materials of the domed city. Meanwhile, Raul makes