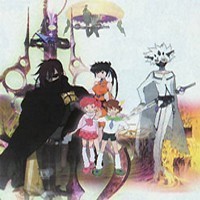 The gateway to another world appears suddenly one day and with its coming awakens two mysterious beasts of astonishing power. When the monsters appear to destroy each other, they vanish – leaving behind only the inexplicable pillar of darkness and the unanswered questions of the natural world.
Twelve years later, the twin children of two scientists who disappeared on the so-called Day of Conjunction go on a hazardous quest in search of their lost parents. Boarding a phantom subway, Ai and Yu travel to Wonderland, a chaotic world of amazing beauty and thrilling danger. Accompanied by Lisa, an enigmatic woman they meet on the train, and Kaze, a brooding stranger with a demon-summoning gun, the twins begin an incredible journey that will lead to the mysterious heart of Wonderland.