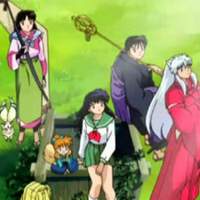 Sequel to InuYasha: A Feudal Fairy Tale…The series follows a time-traveling high school student (Kagome), a half-demon (InuYasha), a lecherous monk (Miroku), a fox demon (Shippo), a demon slayer (Sango), and a nekomata (Kirara) during the Sengoku period as they seek to find all the fragments of the Jewel of Four Souls and to keep them out of the hands of evildoers, especially Naraku.

The manga was adapted as two anime television series produced by Sunrise. The first, broadcast for 167 episodes on Yomiuri TV in Japan from October 16, 2000 until September 13, 2004, was directed by Masashi Ikeda for the first forty-four episodes and by Yasunao Aoki for the remainder. The second series, called InuYasha: The Final Act, began airing October 3, 2009 to cover the rest of the manga series, and is still ongoing.

Real Miku Hatsune @realmikuhatsune commented on InuYasha: The Final Act [TV]
Real Miku Hatsune @realmikuhatsune
Nov 17, 17 at 3:20am
This was honestly such a disappointment. When the Final Act was first announced, I couldn't contain my excitement. I even pre-ordered the first volume. And then I watched the first few episodes released on Hulu, and yikes. All of the passion that was present in the original series had been totally ripped away. It felt more like a quick cash grab than a real attempt to finish what was started. Such a shame.