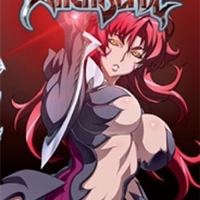 After a short-lived attempt to escape, Masane Amaha’s daughter is taken away from her by the government’s child welfare agency.

She later discovers that she possesses a powerful weapon called Witchblade, after her bracelet activated when a monster tried to attack her. She is unwittingly brought to center stage of the struggle between a powerful organization and the government.

Witchblade is an anime television series written by Yasuko Kobayashi and is loosely based on an American comic series under the same name. Produced by studio Gonzo, the series aired a total of 24 episodes between April 16, 2006 and September 20, 2006.

Masane Amaha
Masane Amaha is the main protagonist of the series, and bearer of the Witchblade. She obtained this legendary weapon 6 years before in the series’ timeline where a massive earthquake ravaged Tokyo; it left her with amnesia, and a baby that she believed was her daughter. Unemployed, clumsy, and awkward around the house, Masane is pursued by the child welfare division to take her daughter.

When the Witchblade is activated, her body is protected by a black armor, and katana blades grow out from her arms. Aside from this, she gains enhanced human strength, and a telepathic link with Rihoko, allowing her to sense if her daughter is in danger.

Rihoko Amaha
Rihoko Amaha is Masane’s adoptive daughter. She appears to be more mature and capable than her age, which is often compared to her mother’s clumsiness.

Yusuke Tozawa
Yusuke Tozawa is a freelance photographer who believes that the Witchblade is associated with several killings. Eventually, he crosses paths with Masane, and becomes her close friend.

Reiji Takayama
Reiji Takayama is a stoic man and is the Bureau Chief of Douji Group Industries, the company that hired Masane. Masane is tasked to handle “ex-cons”, powerful weapons that were created by Takayama’s employers.