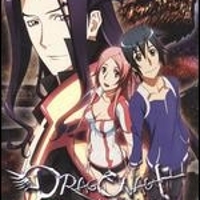 Twenty years prior to the story’s beginning, an asteroid headed for Earth destroys Pluto. Due to Pluto’s destruction, the asteroid, which is dubbed Thanatos, becomes temporarily stagnant in Pluto’s orbit. Now, in order to avoid Earth’s impending destruction, the International Solarsystem Development Agency (ISDA) works on the “D-Project”, and secretly creates weapons called “Dragons” after finding a dragon egg under the ocean. However, they soon find out that the asteroid is not their only threat, as powerful, destructive dragons from Thanatos appear on Earth.

After witnessing what looks like a murder by a strange creature, Jin Kamishina, a lonely 18-year-old boy who lost his family in a shuttle accident two years ago, gets involved with the ISDA and their efforts to battle the dragons from Thanatos. Helping him is Toa, a mysterious girl who saves him from falling to his death after the creature attacks him. As they delve deeper into the mysteries of the dragons, they encounter new friends and enemies, and also develop a closer relationship.

Dragonaut: The Resonance, is a sci-fi romance anime television series by directed by Manabu Ono. Co-produced by studio Gonzo and Nihon Ad Systems, Dragonaut: The Resonance aired a total of 25 episodes spanning from October 3, 2007, to March 26, 2008. On November 2, 2007, a manga adaptation written by Satoshi Kinoshita was released.

Episode 1: “Resonance Hand in Hand”
Jin Kamishina is a young boy who lives by himself, after losing his parents to a shuttle accident two years ago. Later, Jin meets a girl named Toa who saves his life.

Episode 2: “Tryst The World Starts Moving”
Jin finds himself in an ISDA room, and is questioned about the shuttle accident that killed his parents 2 years ago. He learns about Thanatos and the existence of dragons.