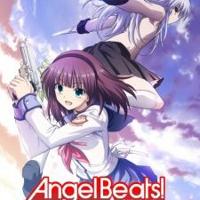 Angel Beats! takes place in an afterlife high school, which acts as limbo for teenagers who have died and experienced traumas or hardships during their lifetime. Before being able to move on to reincarnation, those who find themselves in this afterlife high school must first come to terms with whatever trouble they have brought with them from the time they were still alive. Despite being already dead, the students retain the ability to feel physical sensations such as pain, hunger, and even experience death, only waking up later to have recovered from whatever injury.

The story follows Otanashi who suddenly wakes up in this afterlife school with no other memory except for his name. She meets Yuri who invites him to the SSS (Shinda Sekai Sensen, Afterlife Battlefront), an organization whose goal is to fight against God himself. The SSS also fights a mysterious girl named Angel, who appears to be the guardian of the afterlife high school, and possesses several supernatural abilities. Strangely enough, Otonashi feels drawn to the mysterious Angel, and slowly regains his memory and understand who she really is.

Angel Beats! is an action, comedy-drama, supernatural anime series originally written by Jun Maeda. Produced by P.A. Works and Aniplex, the series aired a total of 13 episodes (plus 2 OVAs), between April 3 and June 26, 2010. Receiving many positive reviews by critics, Angel Beats! was acknowledged during the 14th Japan Media Arts Festival in 2010.

Yuzuru Otonashi
Otonashi is the main protagonist of the series. Although waking up with no memories of his past, he remembers them later on with the help of Naoi. He had a younger sister who he lost to cancer, which became his impetus to study and become a doctor. He meets an accident during his way to the college, and spent his last moments alive helping the trapped survivors until rescue arrived. Before dying, he made himself an organ donor.