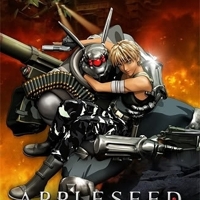 Earth’s last city, Olympus, rose from the ashes of a global war on the backs of Bioroids, artificial clones who make up half the city’s population. Under the strict guidance of a supercomputer, humanity’s last survivors enjoy an idyllic peace, but only on the surface… Human terrorists within the military seek a return to power and clash with the government’s ES.W.A.T. forces led by the legendary soldier, Deunan Knute, and her boyfriend who is 75% machine. Retrieving the Appleseed will end the conflict, and Deunan alone holds its secret.