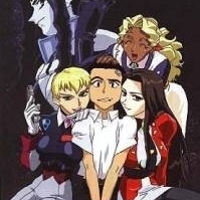 15-year-old Seina Yamada was your average high school student…. with an unbelievable streak of bad luck. Wherever he goes, trouble always follows. One day, he rides by classmate Tenchi Masaki’s house and is nearly killed when a Galaxy Police spacecraft crashes into the lake. When revived, he is met by 2nd Class Detective Amane Kaunaq. Mistaking him to know Tenchi she hands him an application to the Galaxy Police Force, the Universe’s elite crime-fighting force. Thinking it’s for a prize, his parents force Seina to fill it out not realizing that he would embark on his greatest adventure ever.