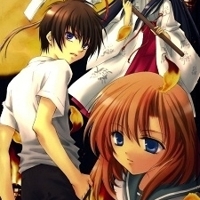 However, the idyllic and tranquil life in this village appears to be not what it seems. Keiichi starts to notice strange events, especially after the village’s annual festival dedicated to its local deity – Oyashiro. He discovers that people have been murdered or gone missing over the past years, and his friends are suspiciously silent about these events.

As Keiichi draws closer to the mystery of his new home, he can’t help but wonder if he could trust his friends, or if he had any friends at all.

Higurashi no Naku Koro ni, also known as Higurashi When They Cry, is an anime adaptation of the mystery-murder, light visual novel videogame under the same name, developed by 07th Expansion. Produced by Studio Deen, the anime series aired a total of 50 episodes (divided into 2 seasons, plus 6 OVAs) between April 4, 2006 and August 1, 2013.

Keiichi Maebara
Keiichi Maebara is the main male protagonist of the series. After a violent incident he was involved in, his family decided to move and ended up settling in the village of Hinamizawa. He has a talent when it comes to rhetoric that helped him win club contests, and earned him popularity throughout the village. Furthermore, he possesses a good natural charisma, allowing him to easily make new friends.

Rena Ryugu
Rena Ryugu is the main female protagonist of the series. A year before Keiichi arrived at Hinamizawa, Rena had initially moved to Ibaraki with her parents. Under the stress from discovering her mother’s affair and the Hinamizawa syndrome, Rena violently assaults three male students. Firmly believing that this was caused by a curse from Oyashiro for leaving the village, Rena and his father move back to Hinamizawa.