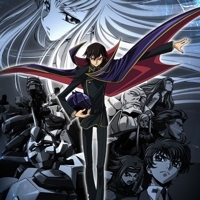 Set on the fictional year of 2010, the world has been split into 3 superpowers: The Holy Britannian Empire (the Americas; also called Britannia), the Chinese Federation (Asia), and the European Union (Europe and Africa; previously known as the Euro-Universe. Also known as Europa United in Akito the Exiled).

The story follows Lelouch Lamperouge, the exiled prince of Britannia who finds himself caught between the crossfire of warring nations. Fortunately, he manages to escape, thanks to a mysterious girl only known as C.C., who also bestows upon him Geass, the “Power of Kings”.

With his newfound “Power of Absolute Obedience”, Lelouch sets out to exact his revenge upon Britannia, guised as a masked vigilante known as Zero.

Code Geass: Lelouch of the Rebellion, also simply known as Code Geass, is an action-mecha anime television series written by Ichirou Oukouchi. Produced by studio Sunrise under the direction of Gorou Taniguchi, Code Geass aired a total of 25 episodes between October 5, 2006 and July 28, 2007. Although receiving a fair share of criticism, the series has been well received by most viewers and has established itself as one of the most popular anime of the recent generation.

Episode 1: The Day a New Demon was Born
Lelouch vi Britannia now lives under the identity of Lelouch Lamperouge, after his original identity had been declared dead 7 years ago. Moments before being caught by the military, Lelouch receives Geass from a girl, which he uses to dispatch his attackers.

Episode 2: The White Knight Awakens
Lelouch leads the terrorist group to engage Viceroy Clovis la Britannia’s army, forcing them to use the experimental Knightmare Frame. Clovis withdraws his army after Lelouch holds him at gunpoint.

Episode 3: The False Classmate
Having his suspicions that his mother was murdered by one of his relatives, Lelouch questions Clovis before killing him. Later, Lelouch learns that Geass works onl