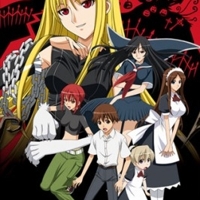 Since Hiro Hiyorimi’s parents died, he and his sister Sawawa have lived apart. Now, Sawawa has gotten a new job as the caretaker of a creepy old mansion, and has sent Hiro a letter asking him to come and stay there with her. Finding the mansion boarded up and apparently empty, Hiro wanders around town looking for Sawawa. Instead, he runs into the new resident of the mansion, and ends up pushing her out of the way of some falling steel beams. Unfortunately, he loses his own life in the process. Luckily, or perhaps unluckily, the person he thought he saved turns out to be a princess of the monster kingdom, and she grants him a second life…but only for as long as he will be her servant.