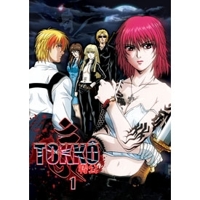 Shindou Ranmaru has just graduated from police academy and assigned to Tokki: Special Mobile Investigation Force. On the day of his graduation, he meets the half-naked girl he has been seeing in his dreams, Rokujo Sakura. It turns out she works for a secret group within Tokki, known as Tokko: Special Public Safety Task Force. Shindou ends up joining Tokko to avenge his parents death, and solve the mystery mass murder of residents in his hometown of Machida. Bottomless pits start to appear around Japan, and mysterious creatures emerge from them, linked to the mass murder of humans. All this to do with something called “The Box of Dirge”…