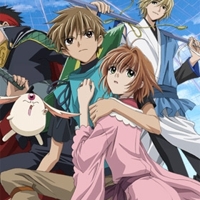 Syaoran and Sakura visit the Birdcage Land guided by Mokona-and-Modoki who were loaned by Yuko, the Dimension Witch. This world was supposed to be a peaceful land where people lived with birds as partners. But now the king is oppressing his subjects: those who do not obey him are deprived of their birds, and the people have come to live in misery. The king rules the land with the power of a mysterious feather. Is this one of Sakura’s memory fragments? Separated from Kurogane and Fai, Syaoran and Sakura, along with Mokona, land in a deep forest. They are attacked by a boy named Koruri, who mistakes them for the king’s guards. He explains them that he is protecting Princess Tomoyo from her uncle, the king, who took away her bird and sealed her voice. For the sad princess Tomoyo hiding in the forest, for Koruri and his friends who are protecting her, and for all the oppressed people of the land, now Syaoran is determined to face the cruel king!