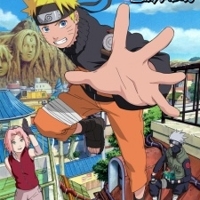 Naruto: Shippuuden is the continuation of the original animated TV series Naruto.The story revolves around an older and slightly more matured Uzumaki Naruto and his quest to save his friend Uchiha Sasuke from the grips of the snake-like Shinobi, Orochimaru. After 2 and a half years Naruto finally returns to his village of Konoha, and sets about putting his ambitions to work, though it will not be easy, as He has amassed a few (more dangerous) enemies, in the likes of the shinobi organization; Akatsuki.

More than two years have passed since the most recent adventures in the Hidden Leaf Village, ample time for ninja wannabe Naruto Uzumaki to have developed skills worthy of recognition and respect. The hyperactive youngster has trained extensively with Jiraiya-sama and returned to Konoha to reunite with friends and, perhaps, partake in more pranks than schoolwork. But Naruto is more determined than ever to become the greatest ninja, and his hard-earned improvements are put to the ultimate test against newer, stronger enemies. “Naruto: Shippuden” is adapted from Part II of the “Naruto” comic book series by Masashi Kishimoto.