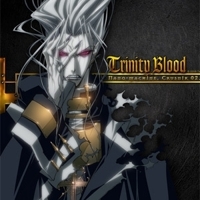 After the unsustainable growth of the human population on Earth, the United Nations has opted to colonize Mars. During this expedition, the humans discovered two alien technologies: The Bacillus virus and the Crusnik nanomachines. The colonizers used the virus, injected it to their bodies, turning them to vampire-like creatures known as the Methuselahs. The Crusnik nanomachines were also utilized, where only 4 test tube babies survived the procedure: Abel, Cain, Seth and Lilith.

Meanwhile on Earth, the apocalyptic war Armageddon has erupted, almost ending the entire human
race. The Methuselahs and Crusniks returned to Earth in order to help in rebuilding society, but has developed a conflict with the humans instead, leading into another war.

The story follows Abel Nightroad, one of the Crusniks created on Mars, a creature that feeds on
the blood of other vampires. He has become a priest, and has joined the “Ax”, a special operations group that aims to protect the humans from the vampires. While Cain, Abel’s twin, aims to continue the war for world domination, and it is up to the Ax to stop their wrath.

Trinity Blood is the anime adaptation of the action, supernatural, light novel series written by Sunao Yoshida and illustrations by Thores Shibamoto. It also has a manga series. There are noticeable differences between the adaptations, especially in terms of character design and the storyline. The anime series is produced by studio Gonzo, and has aired a total of 24 episodes, between April 28, 2005 and October 6, 2005.