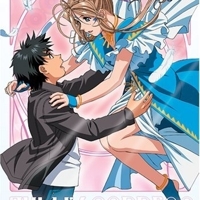 The story follows a college sophomore named Keiichi Morisato, who accidentally dials the Goddess Help Hotline, an agency that grants the wishes of humans. The goddess Belldandy appears before him, and says that she has been sent to fulfill a single wish. Keiichi, believing that he is somehow being pranked, wishes that the goddess stay with him forever. Unfortunately for him though, his “wish” is granted, and now has to live together with the beautiful goddess.

Kicked out of his male-only dormitory, Keiichi eventually ends up in an old Buddhist temple, where he and the goddess were allowed to lodge for an indefinite period of time. To make matters worse, Belldandy’s sisters move in the temple to live with them. Now having the ingredients for guaranteed disaster, Keiichi must survive the craziest part of his life yet!

Ah! My Goddess (also called Oh my Goddess!), is an anime adaptation of the romance-comedy manga series under the same name, written and illustrated by Kousuke Fujishima. Three anime series has been created based on the manga, the first one being studio Oriental Light and Magic’s Adventure of Mini Goddess, that aired between April 6, 1998 and March 29, 1999 with a total of 48 episodes. The other two are produced by studio AIC; Ah! My Goddess and Ah! My Goddess: Flights of Fancy, airing between January 6, 2005 and September 14, 2006, having 26 and 24 episodes, respectively.

Keiichi Morisato
Keiichi Morisato is a college student studying at the Nekomi Institute of Technology. Not only is he a skilled mechanic, but is an exceptional racecar driver as well. Due to his outstanding skills, he was eventually bestowed directorship of the club he was in, the NIT Motor club. His life became even more hectic, after accidentally binding the goddess Belldandy to live with him forever.
While he knows that he loves Belldandy, he has a difficult time in expressing his feelings, and his pure and innocent personality pu