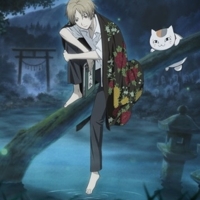 For as long as he can remember, Takashi Natsume has had the supernatural ability to interact spirits, a power he had inherited from his grandmother Reiko Natsume. Due to this strange power, Takashi had been ostracized by the other kids, and he was passed from one relative to another. Upon Reiko’s death, she left her grandson one last gift – the Book of Friends. Powerful and highly prized in the spirit world, the Book of Friends is constantly hunted both by good and evil spirits, and consequently, Takashi.

With a spiritual bodyguard and advisor called Nyanko-sensei by his side, Takashi vows to dissolve the contracts found in the Book of Friends and free the bounded spirits.

Takashi Natsume (Main Protagonist)
Takashi’s parents died when he was still a child, leaving him to the care of distant relatives. However, due to the strange behavior related to his ability to interact with spirits, he is passed from one relative to one another, and found it hard to make friends with the other children. Finally, after being adopted by the Fujiwara, Takashi decided to keep his ability a secret so that it may not cause any disturbance to his new home.
After receiving the Book of Friends from his grandmother Reiko and learning that it held spirits in servitude, Takashi decided to return the names found in the Book of Friends, and free the spirits. Takashi has a very strong spiritual power compared to other characters in the series.

Reiko Natsume
Just like her grandson Takashi, Reiko was considered strange due to her peculiar ability. Neglected by family and friends, Reiko turned to the spirits for companionship. She had an incredible