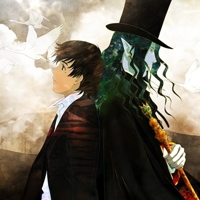 While loosely based on the French novel Le Comte de Monte-Cristo, the story takes place on the far future, during the 51st century, year 5053. Although it retained some elements from 19th century France, the show is mostly dominated by futuristic concepts.

The story follows Viscount Albert de Morcerf, a young aristocrat who, while visiting Luna for a festival, met a self-made nobleman in the name of The Count of Monte Cristo. Fascinated by the Count’s charm, Albert invites him to Paris, where they will meet with friends and family. However, little to Albert’s knowledge, The Count of Monte Cristo has his own ulterior motives.

Gankutsuou: The Count of Monte Cristo is an anime television series based on Alexandre Dumas’ French novel, entitled “Le Comte de Monte-Cristo”. Directed by Mahiro Maeda and produced by studio Gonzo, the anime series successfully aired a total of 24 episodes on Animax, between October 5, 2004 and March 29, 2005. The series has mostly received positive reviews, and is praised particularly for its vivid artwork.

The Count of Monte Cristo
Initially a sailor named Edmond Dantes working for the Morrel shipping company, he was falsely accused and imprisoned in the Chateau d’lf. During his imprisonment, he meets Gankutsuou, a devil that he allowed to possess his body, in exchange for strength and means to gain his revenge.

Gankutsuou
Gankutsuou is a demonic presence that dwells within the Count, but is surpressed by a special drug. He is the main source of will and driving force that helped the Count escape imprisonment, and begin his plot for revenge.

Viscount Albert de Morcerf
A naïve young aristocrat, who was fascinated by The Count after meeting him during a visit on the moon colony, Luna. He is being used by The Count as a tool to penetrate the Parisian society.

Baron Franz d’Epinay
Franz is Albert’s best friend, and cares deeply for him. He is more mature and critical than Albert, a