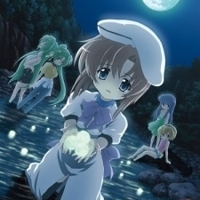 The story picks up after what happened in season one. Things that are left unexplained in the first season get explained in the new season in three separate arcs. Rika Furude lives in the small village of Hinamizawa with her friends. But behind this peace is a darkness that is well understood by Rika. She has been a witness to several unspeakable horrors.

Rika must find that perpetrator behind the deaths that have happened. Unfortunately, trying to solve a mystery while knowing only half the clues proves to be hard and each time she thinks she is changing things, she fails. As the annual festival approaches, she begins to lose hope.

The second season of When They Cry began in 2007; still written by Ryukishi07. It was produced by the Studio Deen and directed by Chiaki Kon. It contains 24 episodes which aired from July 6, 2007, until December 17, 2007.

Episode 1: “Reunion”
Mamoru, with his assistant, visits the abandoned village and meets up with Oishi. They then wonder about the Great Hinamizawa Disaster and the connection to Miyo Takano’s file. Because she was detained in the police station, the adult Rena survived the incident. She shares her knowledge about Rika’s strange behavior. Mamoru then recalls his meeting with the Rika.

Episode 2: “Disaster Awakening Chapter One – Playing Tag”
Back in June, the club participates in a “zombie tag” game. They run into Irie and the others on their way home. They proceed to tell Keiichi about the yearly murders. Rika gets weary and depressed because of the story. Adding to her worry, Satoko utters a phrase once spoken by Keiichi.

Episode 3: “Disaster Awakening Chapter Two – Powerless”
Satoko, worried about Rika’s depression, tries to help her but gets denied by Rika. Later that night, Satoko gets woken up due to Rika arguing with someone regarding her approaching death and that she cannot do anything about it.