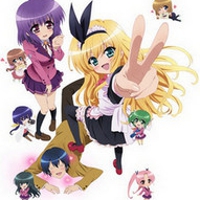 High school student Taro Sado comes to realize that he is an extreme masochist and attempts to conceal this from his crush. To fix his problem, he enrolls in his school’s “2nd Volunteer Club”, where Mio Isurugi and the other members attempt to cure him through various “training” regimens. Taro falls in love for the first time with a girl, who is in fact his cross-dressing male friend. Because Taro wants to be cured of his masochism so that he can confess his love to Tatsukichi, he goes to the Second Voluntary Club to get help. There he meets Mio Isurugi, a self-proclaimed god, and Arashiko Yuno, the girl who made him a masochist in the first place, however, she has androphobia. The club adviser is the school nurse, Michiru Onigawara. Other characters include Yumi Mamiya, Arashiko’s best friend, and the president of the Inventors Club, Noa Hiragi, and her lolicon assistant, Himura Yukinoj.

Amazon
Anime Rating
8.0/10
679 users added this.
Similar in these categories.