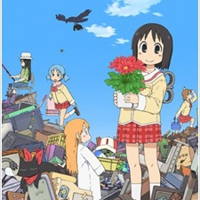 Ordinary life of high school students when in all honesty it is nothing but normal. theirs a kindergarten genius who built her own mom with a giant gear in her back and cake in her limbs and high school students who have some serious problems and a talking cat. The series follows the lives of a group of high school students and their school. Various oddities and absurdities abound, such as a robotic girl made by a scientist who is an eight-year-old girl, a boy who rides a goat to school with his butler, a girl who can procure various guns out of thin air, a cat that can speak and a principal who has wrestled a deer. Despite its bizarre settings and characters, the students still lead normal lives.

Amazon
Anime Rating
8.8/10
2519 users added this.
Similar in these categories.