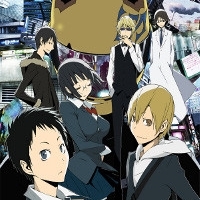 Ikebukuro, Tokyo.
Mikado Ryugamine is a young man who yearns for the city like no other. At the invitation of his childhood friend, Masaomi Kida, he moves to Ikebukuro and enters school there.
Masaomi tells Mikdado about some dangerous people in Ikebukuro to watch out for. There are two in particular, a brawling champion named Shizuo Heiwajima and hobbyist information broker Izaya Orihara. And then there is a mysterious organization of unknown origins known as Daraazu.
On his first day headed into the city, Masaomi sees a jet black motorcycle being driven by a headless rider. From then on, a series of random attacks and events begin to occur on the streets of Ikebukuro, and a group known as the Kikinada Gang arises as Ikebukuro begins to crumble.