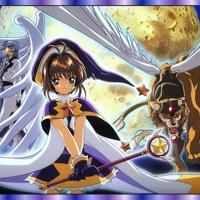 Ten-year-old fourth grader Sakura Kinomoto opens a mysterious book in her father’s study and accidentally releases the magical Clow Cards. Created by the half-English half-Chinese sorcerer Clow Reed, the Clow Cards were sealed within the Clow Book upon his death and represent a combination of magic from Clow’s mixed heritage. Each card has its own personality and characteristics and can assume alternate forms when activated.

Cerberus, the guardian Beast of the Seal, awakens and emerges from the book’s cover. Upon learning the cards are gone, he tells Sakura that she must have special powers, and that it is now her responsibility to retrieve the missing cards. As she finds each card, she must battle its magical personification and defeat it in order to seal it away. Cerberus acts as her guide and mentor throughout the quest, while her classmate and best friend Tomoyo Daidouji films her exploits and provides her with costumes, insisting that she must “wear special clothes for special occasions.” Her older brother Toya Kinomoto watches over his sister while pretending that he is unaware of what is happening.

As the series progresses, a rival in the form of Syaoran Li appears. A descendant of the late Clow Reed, creator of the Clow Cards’ and their guardians, Syaoran travels to Japan from Hong Kong to recapture the cards, but finds his goal complicated as he comes to respect Sakura and begins aiding her instead. Once Sakura has captured all of the cards, she must undergo the Final Judgement. Yukito Tsukishiro, Sakura’s crush and the best friend of her brother, is revealed to be the false form of the card’s second guardian Yue, who tests Sakura to determine if she is worthy of becoming the card’s true master. Sakura is aided in the test by Kaho Mizuki, who is later revealed to have been sent by Clow to ensure Sakura is able to pass the test because he chose Sakura to be the cards’ new master when he knew he was going to die.

With Sakura as the new master of the C