The Rising of the Shield Hero [TV] 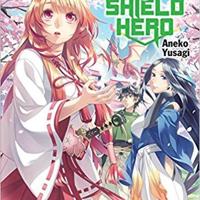 Naofumi Iwatani was summoned into a parallel world along with three other people to become the world’s Heroes. Each of the heroes were respectively equipped with their own legendary equipment when summoned. Naofumi happened to receive the Legendary Shield, the sole defensive equipment, while the others received weapons capable of attacking. Unlike the other heroes who are fully supported by the kingdom and gain several strong allies each, Naofumi’s luck turns to the worse after his single companion, later revealed to be none other than Princess Myne, betrays him, and leaves him devoid of all assistance and supplies after she falsely accuses him of sexually assaulting her.

Shunned by everyone from king to peasants, Naofumi is forced to train as a hero alone while working to make ends meet, until he buys from a slave trader a Tanuki Demi-Human little girl named Raphtalia and an egg that hatches into a bird creature whom he names “Filo”, both quickly growing into adulthood and becoming powerful companions by raising them. As they little by little gain the trust and gratitude of the people with their heroic actions, Naofumi’s party work hard to fight the massive hordes of monsters that attack the world in waves while dealing with the conspiracies surrounding them and their friends.