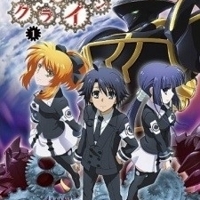 A semi-serious anime wherein Tomoharu Natsume is your average high-school student but with an exception: he is being followed everywhere by Misao, his ghost best friend. Misao died three years ago in an airplane accident with Tomoharu barely surviving the accident.

As he became a high school student, Tomoharu starts to live on his own in a dorm called Meiou-tei. Because of being somewhat independent and away from his mother, who recently remarried, he starts to enjoy his carefree high school life. His life starts to get complicated after he was given a mysterious case and gets invaded by several groups of people. The contents of the case still unknown, Tomoharu tries to escape them with Misao.

The story continues as Tomoharu tries to know about the secret of the trunk, Misao’s connection with it, and its influence on the world.

Asura Cryin’ is a school action story written by Gakuto Mikumo. It was produced by the Seven Arcs studio and directed by Keizo Kusakawa. The first season has 13 episodes which aired from April 2, 2009, until June 25, 2009. A second season was made soon after and started to air on October 1, 2009.

Episode 1: “Mechanical Demon God”
A flashback of the accident that killed Misao and almost killed Tomoharu is first shown. An unknown girl approaches him on his first day in his dorm and gives him a silver case, which is said to be entrusted to him by his brother. Not long after, Tomoharu and Misao gets attacked by various people who seek the ‘Asura Machina’ and ‘Extractor’.

Episode 2: “The Issue on the Destroyed Future”
The next day, Shuri tells Tomoharu and Misao all about the Royal Dark Society. Later, while visiting his new landlord, Tomoharu runs into Takatsuki. Takatsuki’s father soon arrives and after just learning from Takatsuki that she was the one who broke into his room in the previous evening, things get awkward as he faces her father. The First Student Council President, named