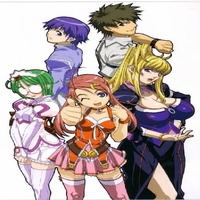 When mankind faces an alien force with technology light years ahead of its own, it may take a man obsessed with the past to save the Earth. The fate of humanity rests on whether the eccentric billionaire Sandman can build a machine as great as the myths of old. His creation is a god for the modern age, a deity forged of circuits and steel – it is Gravion!

Only a young band of orphaned misfits are born with the ability to pilot this top-secret weapon. All life on the planet depends on how well they can fight the Zeravire – if they can only stop fighting amongst themselves!

Gravion is a mecha adventure anime series written by Fumihiko Shimo. Produced by studio Gonzo, the series aired a total of 13 episodes between October 7, 2002 and December 16, 2002.

Episode 1: The Fortress of the Deity
Eiji Shigure sneaks into Klein Sandman’s castle looking for his sister Ayaka. However, his disguise is compromised and is chased into the castle’s depths. There, he discovers a giant robot, and meets Toga Tenkuji. Later, Sandman announces that the Earth is under attack by aliens. Sandman’s units immediately launch a counterattack, taking Eiji with it. Gran Kaiser and the Grand Divas combine and becomes the God Gravion to fight against the Zeravire invasion.

Episode 2: Mission of Gravity
Gravion engages against the Zeravire, but is in a tight battle. In an attempt to assist Gravion, the navy fires its particle projection cannon but proved to be ineffective against their enemy. Gravion is then smashed into its constituent pieces and Gran Kaiser sinks into the ocean, taking Toga with it. At the castle, Sandman convinces Eiji to pilot the G-Attacker. Later, the Zeravire returns in a stronger form. With the Graviton Pressure Punch and Graviton Arc, Gravion finally manages to defeat the Zeravire.

Episode 3: Labyrinth
The world leaders express their frustration on how Sandman refuses to let them help fight against the alien in