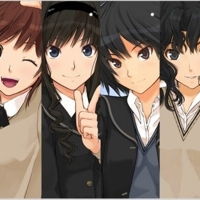 After being stood up during a date on Christmas Eve, Junichi’s confidence took a critical nosedive. Two years later, he’s now a second year high school student and ready to give love another chance. Will he fall for the beautiful and popular Morishima, mischievous childhood friend Kaoru, shy and timid underclassman Sae, dependable class president Tsukasa, hardworking underclassman Ai or his gluttonous childhood friend Rihoko? Only time will tell, but one thing’s for sure: Junichi is determined to make his next Christmas Eve date a successful one!

The TV anime is based on a popular manga series which has been serialized over several years and under numerous titles such as “AMagami: Precious Diary” and “Amagami: Love Goes On!”, which ran for four years from March 2010 through January 2014. The anime is adapted into six story arcs, each focused on one of the main heroines/love-interests from the series.