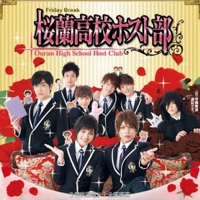 Haruhi Fujioka is a scholarship student at the prestigious Ouran Academy, a fictitious high school located in Bunkyo, Tokyo. Looking for a quiet place to study, Haruhi stumbles upon the Third Music Room, a place where the Ouran Academy Host Club, a group of six male students, gathers to entertain female “clients”. During their first meeting, Haruhi accidentally knocks over and breaks an antique vase valued at ¥8,000,000 (US$80,000 in the U.S. English manga)1 and is told to repay the cost in service to the club. Haruhi’s short hair, slouching attire and gender-ambiguous face cause her to be mistaken by the hosts for a male student. The hosts all agree that Haruhi would be a good host, thus making her join the host club. Ultimately she agrees to join the Club as a host herself (dressed as a male) in order to pay off her debt.2 She agrees to join since she does not mind hosting as long as she can pay the debt off faster. The hosts do later find out that she is, in fact, a girl. They keep this a secret, so no one will be able to tell. The Ouran Private Academy encompasses kindergarten to twelfth grade (along with a university). Most students come from wealthy families, but in special cases, merit scholarships are granted to exceptional students from a lower income bracket. The school’s unofficial motto is “Lineage counts first, wealth a close second,” meaning students with stellar family backgrounds but low socioeconomic status may be given top priority over those from rich families with lesser pedigrees.