The World God Only Knows [TV]

the world god only knows 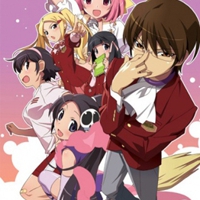 (Wiki)
Keima Katsuragi, a second-year high school student, is an avid bish?jo game player. He is known on the Internet as “The God of Conquests” (?? Otoshi-gami?) for his legendary skills to be able to “conquer” any 2D girl in games. However, in his actual school life, Keima is known as otamegane (??), a derogatory portmanteau of the two words otaku (??) and megane (????, “glasses”), and is considered nothing but an intelligent yet gloomy geek with glasses.

At the start of the series, Keima receives an e-mail offering him a contract to “conquer” girls. When he accepts it, thinking it is an invitation to a game challenge, a cute demon from Hell named Elsie appears: a Spirit Hunter. She asks for his cooperation to help her in catching the evil spirits that have escaped to the Human Realm: the “Loose Souls”, which were once Old Demons from Hell. These evil spirits hide themselves inside the hearts of people (in their case, girls), feeding off the hosts’ negative emotions to replenish their power and strength, in becoming whole demons once again (which in turn, the host becomes an empty shell of a person). Elsie suggests that the only method to force the evil spirits out is by “conquering” the girls hearts, making them fall in love with him and filling up the gaps which the escaped evil spirits hide in, in which she is then able to capture them. Interested only in video game girls, however, Keima is appalled by the idea, and refuses the assignment as he has no romantic real life experiences whatsoever. Nevertheless, with the contract already agreed, Keima has no choice but to help Elsie no matter what, as they will be beheaded by an invisible (to others) red collar around their necks if they fail.

After winning the hearts of several girls (and capturing the spirits residing in them), Keima and Elsie are given an even greater mission: to awake the six goddesses who are daughters of the god Jupiter, the “Jupiter Sisters”. Each sister is dormant in the heart