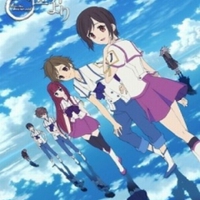 About one thousand years into the future, civilization has been retrograded and humans are living dispersed within small communities. People in this era have a psychic power called “Juryoku” which materializes things they imagine. In the absence of advanced scientific technology, people are using this power as a major source of energy. One day, a girl called Saki, along with her friends, finds a small archive robot outside the town. It records the ancient history of humans. It tells them that Juryoku was found in the 21st century and the discovery caused a world war between psychics and non-psychics. The psychics won this war and thus their reign of terror began. When the adults in town figure out that the children discovered this forbidden knowledge, they seal their Juryoku and exile them. Saki and the others end up in a forest where they meet a huge hairless bipedal mouse known as a “Bakenezumi” and get involved in a violent war the creatures are currently engaged in.