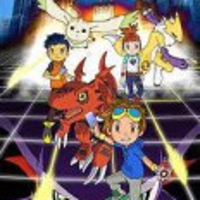 An animated series based on the popular children’s toy “Digimon”, in which kids raise electronic monsters to fight against those raised by other kids. The show follows the adventures of a team of real monster trainers as they travel about honing their skills and facing challenges from rival trainers.

Digimon Tamers is about a boy named Takato who is a fan of Digimon. He believes its only a game until he swipes a mysterious card into his card reader, and gets a D-arc. He draws a Digimon he names Guilmon, and swipes it through the D-arc and Guilmon becomes real.