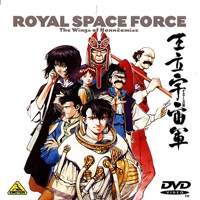 Surrounded by a cynical public and corrupt, manipulative State leaders, the Royal Space Force (RSF) is largely viewed as a joke as well as a waste of precious money and resources. After a chance meeting with a young, empathetic woman reencourages cadet Shiro Lhadatt to become the first man in space, the RSF cadets and a team of aging scientists rush to complete their epic launch before the military uses their space program as bait to start an all-out war.