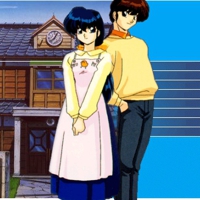 Maison Ikkoku (Mezon Ikkoku) is a Japanese seinen manga written and illustrated by Rumiko Takahashi and serialized in the manga magazine Big Comic Spirits for seven years from 1980 through 1987. Maison Ikkoku is a bitter-sweet comedic romance involving a group of madcap people who live in a boarding house in 1980s Tokyo. The story focuses primarily on the gradual developing relationships between Yusaku Godai, a poor student down on his luck, and Kyoko Otonashi, a young, recently widowed boarding house manager. The manga has been translated into English and fifteen volumes spanning the series are available from Viz Media.

The manga was adapted into a ninety-six-episode TV anime series which ran on Fuji TV from March 26, 1986 to March 2, 1988. The anime included some story arcs not covered in the manga. A Final Chapter movie, three OVAs (one original story and two summaries), and a music special were also produced.

A live action movie was also made by Toei in 1986, though it deviates significantly from the story in the manga and anime. A TV special aired in May 2007 on TV Asahi starring Taiki Nakabayashi as Yusaku Godai and Misaki Ito as Kyoko Otonashi. The finale to the special aired in July 2008.

Amazon
Anime Rating
8.8/10
156 users added this.
Similar in these categories.