The End of Evangelion [Movie] 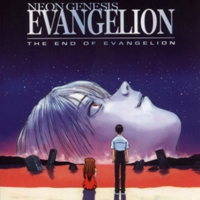 The End of Evangelion (?????? Air/????, Shin Seiki Evangerion Gekij?-ban: Air/Magokoro o, Kimi ni?) is a 1997 Japanese animated science fiction film written and directed by Hideaki Anno along with Kazuya Tsurumaki; it ended the anime releases in the Neon Genesis Evangelion franchise until the Rebuild of Evangelion tetralogy remakes were announced in 2006.

The film is divided into two approximately 45-minute episodes: Episode 25’: Love is Destructive (Air in the Japanese version) and Episode 26’: ONE MORE FINAL: I need you (My Purest Heart for You (????, Magokoro o, kimi ni?), an allusion to Charly,1 in the Japanese version). They can be considered as either a “replacement”2 for the original ending of the popular animated series Neon Genesis Evangelion or a more detailed, “real world” account of the series’ original ending in episodes 25 and 26, which takes place almost completely in the minds of the main characters (the “experimental approach”, as the Red Cross Book calls it in the commentary, or style, being largely shaped by time and budget restraints).