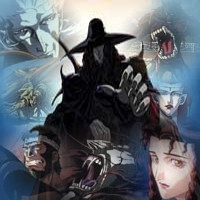 Continuing his quest to rid the world of the Nobility, the Vampire Hunter D, a dhampir (half human, half vampire), is summoned by the Elbourne family to rescue their daughter Charlotte from the captivity of Meier Link. The race against time not only involves saving the girl, but also the additional hiring of the Markus Brothers; a volatile and infamous group of Hunters known for their tendency to rid themselves of the competition by any means neccessary. To make matters more complicated, when Charlotte is found she is more than reluctant to leave the side of her new love…