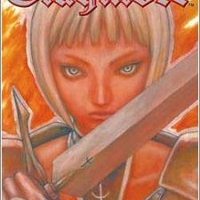 The series is set on a fictional medieval island where humans are plagued by Yoma (妖魔), humanoid shape-shifters that feed on humans. A mysterious group, known as The Organization, creates human-Yoma hybrids to kill Yoma for a fee. These female warriors wear armored uniforms. The public refer to them as “Claymores,” alluding to their Claymore swords,5 or “Silver-eyed Witches,” due to their silver eyes.6

Yoma and Claymore warriors alike are powered by a demonic energy, Yoki, which allows shape-shifting and extreme strength. When warriors use too much Yoki, they “awaken,” becoming a super-Yoma called an Awakened Being. The act of awakening is likened to the feeling of sexual climax, so while both male and female warriors existed in the past only the women proved to be successful warriors and so the creation of male Claymores stopped altogether.

The island world is divided into 47 districts, with one warrior assigned to each.7 Claymore warriors No. 1 through 47 are ranked on their baseline Yoki potential, strength, agility, intelligence, sensing and leadership. A warrior’s rank rises and falls according to the warrior’s strength in relation to other warriors. It is unclear whether the warriors strength comes from training/experience or if the potential lies within the warriors themselves.

In addition to all having different names, most warriors (usually high in rank) further their individuality by possessing a unique sword technique, fighting style, or yoki ability. The sword techniques are unique to the Claymores: yoma and awakened beings do not fight with swords and a normal human body could not perform them. Examples of sword techniques are: twisting the arm around and thrusting for a drill-like strike, unsheathing and re-sheathing the sword faster than the eye can see, or vibrating the sword so quickly the enemy cannot tell where the blade is coming from. A few fighting styles include: stretching the arm, fighting with two blades, and releasing a burst

Amazon
Manga Rating
8.9/10
654 users added this.
Similar in these categories.