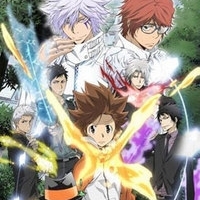 Tsuna, a timid junior high student, is a failure at school, sports, and social life. But everything around Tsuna has been completely changed when a baby called Reborn, who claims to be an Italian hit man from Vongola family shows up! Reborn was sent to groom Tsuna for his future life as a mafia boss of the family!

All of a sudden, Tsuna gets involved in intense battles, and has to overcome numerous trials and grow up surrounded with Reborn and good fellows!

Tsuna works very hard to become the 10th Vongola Boss. He is part of the 7 Guardians of the Vongola, he is to be protected by the other 6. In the 7 Guardians, there are 7 elements, (Sky) Tsuna, (Storm) Hayato, (Rain) Yamamoto, (Thunder) Lambo, (Sun) Ryohei, (Mist) Mukuro/Chrome and (Cloud) Hibari.

These 7 Guardians go through a lot of dangerous enemies like Varia, consisting of another 7 enemies which tried to take the Vongola rings, Xanxus, Squalo, Marmon, Mosca (with the 9th inside), Levi, Belphegor and Lussuria. After that, Reborn is sent 10 years to the future, supposedly to come back in 5 minutes, but he didn’t, so Tsuna and all the other guardians except for Ryohei and Hibari search for him. They find out that in 10 years, a man called Irie Shouichi has helped the Millefiore family destroy the Vongola family and they succeeded. Tsuna, desperate to go back to the past, attacks Irie Shouichis base at Japan.