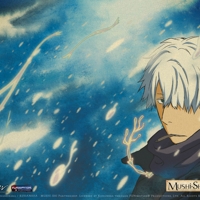 Between this world and the next, there is a point where it becomes impossible to distinguish between plant and animal, between life and death. It is a place man was never meant to tread… This is where you will find the mushi.

Neither good nor evil, they are life in its purest form. An unseen river reshaping the path of man, through their very presence we are changed.Vulgar and strange, they have inspired fear in humans since the dawn of time and have, over the ages, come to be known as “mushi.”