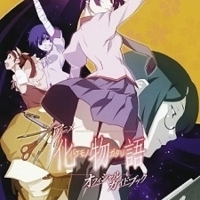 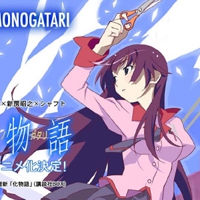 Third-year high school student Koyomi Araragi barely survives a vampire attack, thanks to the help of Meme Oshino, a strange man who lives in an abandoned building. Despite being able to save his humanity, several powers from vampirism remained in his body as side effects. With the help of their class representative and close friend Tsubasa Hanekawa, Araragi tries to live a normal life with his newfound abilities.

After catching his female classmate Hitagi Senjougahara from falling down the stairs, Araragi accidentally discovers her secret – she is weightless. Although Hitagi threatens Araragi to stay away from her, he insists on helping her, and eventually convinces her to visit Meme Oshino, the man who cured Araragi from his vampirism. Realizing that Araragi wanted to help, Hitagi decided to make him her friend.

Watch Koyomi Araragi as he encounters other girls with supernatural oddities, and his adventures involving all kinds of mysterious creatures.

Bakemonogatari is an anime adaptation of the fantasy light novel series written by Nisio Isin with illustrations by Vofan. Produced by studio Shaft, the series aired a total of 90 episodes (divided into 3 seasons), between July 2009 until present. A game was also created by Namco Bandai Games for the Portable Playstation.

Koyomi Araragi
Koyomi Araragi is the main protagonist of the series. He is a third-year high school student who is close to failing all his subjects except math. During spring break, Araragi was attacked by a vampire and was infected with vampirism. However, Meme Oshino helps him regain his humanity, but several powers from vampirism remained. This includes his ability to see well in the dark and increased regeneration speed. Despite knowing that he is not a vampire, he remained scared by the sunlight.