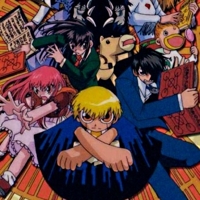 When he holds a mysterious red book and chants a spell, a lightning attack comes forth. When this strange boy Gash arrives at his house, the life of lazy middle-schooler Kiyomaro Takamine is thrown into chaos!! Gradually, Gash’s true identity and abilities are revealed! Children from the demon world come and attack one after another!! What is the destiny of Kiyomaro, who has decided to fight alongside Gash!? New super-intense battle action!!

(description from AnimeNfo)
Note: “Gash” is called “Zatch” instead in most non-Japanese language releases.