Whats the first thing You'll do after Covid ends?

1. Finish studying and practicing Japanese language.
2. Take JLPT. If failure or poor grade, return to Step 1. If any good grade, go to Step 3.
3. Study Japan's rules, laws and understanding culture.
4. Study about SSI and moving outside of the U.S..
5. Study about Japan's different job types to find the ones that fit me the most.
6. Study about making friends wisely.
7. Train harder on mental and physical health and strength while finding the right fashion.
8. Visit Japan long enough to be sure
to decide whether to move there for job and other reasons or stay in the U.S..

@meisterman1985
My advice is to temper your expectations. Japan is not perfect by any means, and especially hard to live in as a person who is foreign-born. Nowhere is perfect, everywhere has its positives and negatives, along with their fair share of demons in the closet.

Moving to another country does not solve many problems, especially if you are moving from one advanced country to another, if nothing else, it will likely give you more problems. This is extra true if you don't intimately know what kind of a life you are getting yourself into.

You can ask any one of us that has lived in Japan long term, who has assimilated enough with Japanese culture to feel a serious amount of "reverse culture shock" when leaving. I think most of us will agree, "most 'Japanophiles' have an extremely skewed image of what Japan is truly like".

Think of it this way, go find an 'Americanophile', someone who is a huge fan of American pop culture, who watches and loves a ton of American movies and media. How would their opinion of the US be compared to the reality of what America truly is?

I loved living there, and I consider it a "second home", but in the end, the US won out when it came to where I would prefer to live permanently.

I am not discouraging you from studying and learning more about Japan, or even moving there permanently, I am just giving you the advice to try to keep yourself grounded.

I have a good friend of mine that was planning a group trip to Japan, which was canceled by the outbreak. I would love to go back to visit. Plus, it would be a great opportunity to visit somewhere I havent been before, like Hokkaido or Hiroshima. It would also be fun to go to another Comiket while there, along with visiting Akiba again too. I also miss going to a matsuri...

I am looking at a decent amount of personal improvement for my outlook after all this blows over. On multiple facets. (Even though I am in the beginnings of starting stuff right now, with less restrictions, it should allow me to kick things into a higher gear.)

I know your advice already. Japan is like NYC; nice place to visit, but not worth living in. YouTube stars like "Nobita from Japan" and "Hello Lilly" mentioned some of the same things you said.

But so far, I'm still studying Japanese language quite well. I'm practicing writing Second Grade Kanji. My heart is still telling me to never quit! I'm her most consistent student and one of her other students wishes he was me, while another said my Japanese sounds very much better than his.

Some people think I'm amazingly fluent, some think I'm still like an average foreigner learning Japanese. I might look and sound quite amazing, but I'm not fluent, yet.

My teacher, her family and students are also hoping to go on a group trip to Japan next year or so.

My area is full of too many rednecks and valley girls that like Chik-Fil-A, jogging shorts, SnapChat, Desperate Housewives, Taylor Swift, etc., etc.

But I'm far different from neurotypical people and had a traumatized difficult childhood. 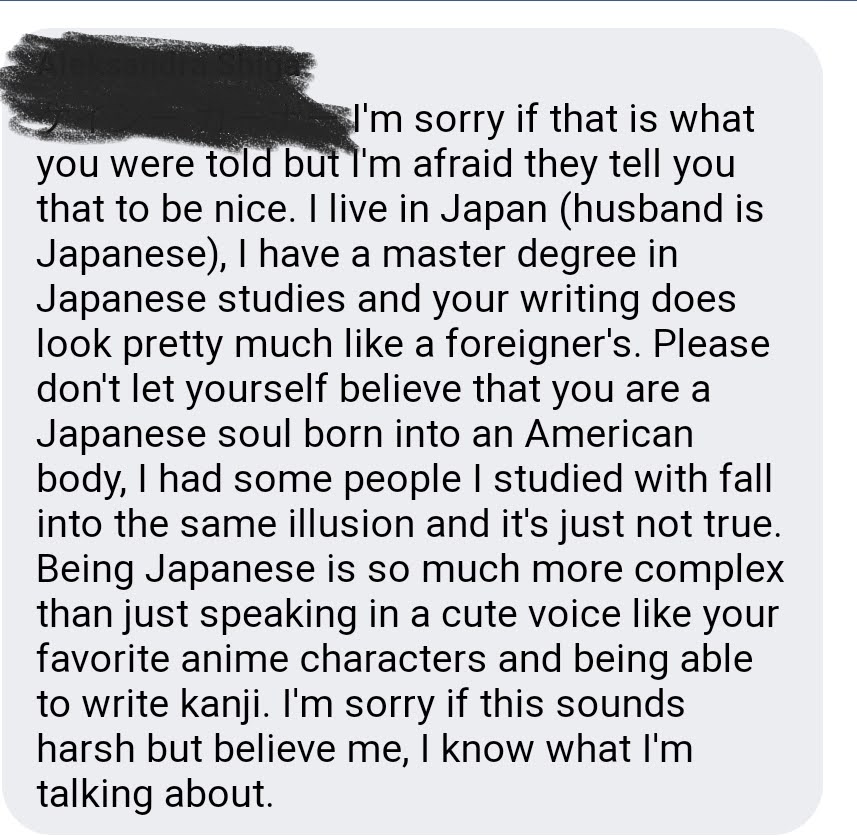 " I don’t understand what’s wrong with your handwriting that looks like a foreigner’s tbh. I can tell my writing could be worse than yours even I’m Japanese (*≧∀≦*) my friend’s also is not as well as yours even she can speak Japanese fluently like us "

By the way, those characters in my profile image are video game characters, not anime characters. They are Asuka Honda and Karina Toyota from Asuka 120% BURNING Fest. series.. And I'm more of a gamer than a manga/anime fan.

After covid ends I want to travel to Japan for atleast a month. Rent a car and just go wherever. After that work for a year and then go to Uni.

I'm gonna go get a bunch of fast food for my own.
No fast food restaurant, or any other food place, delivers where i am.

Continue
Please login to post.
Back to Random Chatter