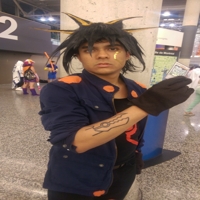 I wish lol no I never have, I want to travel more, wbu?

yeah especially us canadians eh? haha and alright, have a good night too

haha thanks, i'll keep that in mind for the next week haha. i really like what im doing in my schooling because its so open with what i can do, like it branches out into lots of different jobs which a lot sound like fun. just gotta get through these little jobs before then haha

Hi. Thanks for the request.

Yep. Better to take a chance, something with maybe 50% chance of either improving or suffering with change, rather than 100% chance of suffering at home. XD
Even if something goes wrong, I'll learn from it.

I have never actually finished the Yugioh anime, and never played the game(could never get into TCGs in general). I really liked the abridged series though, and it did bring a lot of nostalgia from watching the first few seasons. If you go to cons in Montreal, maybe we'll even run into each other someday. I plan to at least visit each one once, maybe more. Not really sure how long it will be before I actually go, though.

I am moving in with my best friend. For many reasons really. I want independance from my parents/family, want to live life how I want to, want to be with my friend, not be restricted by parents, etc. I think moving there would be the only way to learn French easily too, because I cannot learn a language without immersion.