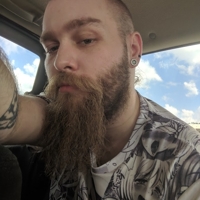 My general interests include Anime, Manga, Music, I play a lot of rhythm games and RPGS, Been caught up getting better at Muse Dash while chilling with friends. I don't watch too many movies, Grew up with Star Wars and the Lord of the Rings series, Favorite anime gotta be the entire Monogatari series, with a close second to the "Certain magical Index/Certain Scientific" series/sub-series, Anohana and Clannad if I want to cry, just the anohana theme gets the tears going, y'know.
I am an audiophile, while my tastes are particular, they are widespread and vast, I enjoy a lot of early 00s alternative, EDM through-out the decades, late 90s to early 00s punk rock, metal, and variations there in. Skrillex is dead, but he ushered an EDM era to rival the wave 80s and despite his sucky songs, that has my respect.
I've read far too much manga and light novels, probably Berserk, Overlord, Karekano, Kingdom, and Ascendance of a Bookworm would be in my top 10, with KonoSuba (literally "A God's Blessing on This Wonderful World!)

Straight up NSFW, probably my biggest turn ons would be lingerie, garters, panties especially, and any form fitting leg covering. Petite women with submissive tendencies, as well as roleplaying both on tabletops and on bedtops. Also enjoy wholesome cuddles on the couch watching netflix or even old Disney Gargoyles dvds to see what happens. I'm not into being dominated, but I abide by a "anything I want to do I am willing to let you do."