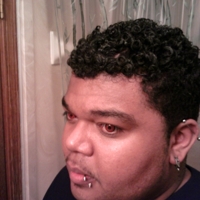 Male
Single
Likes: Females
OK
Activity
About
Pictures
More ▼
7
Friends 88
Anime 12
Cons 0
Awards
Greetings. I'm kinda new to this online dating scene so bare with me. I'm Mario. I am of black and mexican descent. I'm a rivethead, goth, and hip-hop elitist. I have 9 piercings. Tongue, ears, two labret (spider bite), a third lip ring for the other side, nipples, and one industrial. I don't have any tattoos as of right now, but its probably gonna happen.

Any ways, I've been into anime since the early 90s, and I've been going to conventions since 2000. Be that as it may, I only have a handful of friends of mine who share this passion of mine. That's why I'm here. If I could find a girl that has similar interests, that would be awesome. However, even just making more otaku friends would be pretty cool.

As far as non-anime related things about me...My favorite types of music are industrial (that crunchy electronic music with voice distortion and german samples) and self-conscious-socio-political-pseudo-intellectual hip hop. :) I love going to concerts too. Seen way too many to lists, but I do have biased for the heavier stuff. I also love j-rock. I really love the aesthetic of visual kei...too bad its kind of a fad that's fading away. But I still listen to it. Some of my favorites are Dir en grey (of course), PIERROT, BUCK-TICK, Plastic Tree, BLAM HONEY, Penecilin, and so many others. And of course since I have been to many A-kons I have seen some awesome bands perform (Seikima-II for example).

Music is also a passion of mine that I would like to someday pursue professionally. But that's something I'd have to discuss on a more one on one personal level with whoever is interested. :)

Of course I'm a big gamer as well. Just like my music...I play just about everything...except Madden. lol Right now I'm playing Final Fantasy 7 Remake, Phantasy Star Online 2, Monster Hunter World, Genshin Impact, and Code Vein. I'm on xbox live all the time. Let me know if you want to play a game or two and we can die against 12 year olds together!