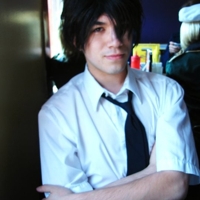 i remember you!! from otakon!!!

I saw you liked Code Geass and attending Otakon. I cosplay as C2 and many other people. You look amazing!!! I do hope to hear from you.

Yep. . . but then again. The japanese make the cool stuff themselves. Wouldn't make much sense for them to make and send it to America first. . . no matter how much I want it lol. I remember the yuna controller! I wanted that thing haha. I felt the same way about the tron controller they came out with for the wii and xbox, and I'll tell you a secret. . . I dont own an xbox . . . .or a wii for that matter. I kinda want an xbox now though.

Sounds like a good idea XD (lol, can't sew either >_<). Any upcoming cosplays you're planning on doing?

Hi My names TOshimurra i like ur cosplay outfit very cool its from fullmetal alchemist right anyway it looks cool what kind of game you like and animes i see you like beserk and avatar awsome lol My Favorite Character on there is Zuko! lol ZuZu lol

I know! I havent gotten to play the new FF either, and yes of course I'm excited for Last story. Japan always gets the new game first. I hope the send it over here. If not that's all the more reason I need to learn the language and move over there.

Nope >_< but of course I want to..and yeah, cosplaying should be fun >_< Do you usually make your cosplays or...? I know some like to buy the costume and some like to make their own.